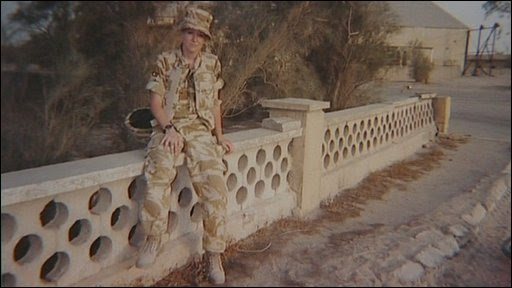 A soldier bidding to become Miss World has said she hopes taking part in the competition will help charities working with British servicemen and women.

L/Cpl Katrina Hodge, 21, from Tunbridge Wells, Kent was drafted in after the previous Miss England stepped down.

"It's something I feel very strongly about because of all the work they do," she said at the contest's launch.

"It's not just Help for Heroes, but people like SSAFA (Soldiers, Sailors, Airmen and Families' Association)."

L/Cpl Hodge was first runner-up in the 2009 national contest, but was promoted after Rachel Christie, 21, stepped down to concentrate on clearing her name.

Miss Christie, athlete Linford Christie's niece, was arrested over an alleged brawl at a nightclub in Manchester last week.

L/Cpl Hodge has been given leave from her duties as a soldier in the British Army to represent England in the Miss World final in Johannesburg, South Africa, on 12 December.

She said her military experience could help her in the competition.

"I've only had just over 24 hours to prepare and a lot of the girls have a year, but I'm just going to take it in my stride," she said.

"I'm used to having to pick up my life in five minutes."

The soldier had been due to go to Afghanistan before she was crowned Miss England.

She was previously recognised for her actions during a posting in Iraq, and has earned the nickname "Combat Barbie".

L/Cpl Hodge said she hoped her example would inspire other young women to join the Army.

"A couple of years ago, before I did Miss England, I couldn't even do a catwalk or walk in heels.

"It just shows anything is possible.

"When I joined the Army, I didn't know what to expect, but I love it and my colleagues are really supportive.

"They see me without make-up and with my hair scraped back but, to them, I'm just one of the lads."