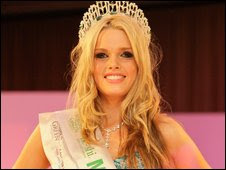 Laura Patterson, who has been crowned Miss Ireland 2009

A 19-year-old Londonderry woman has been crowned the new Miss Ireland.

The student and part-time model will now represent Ireland in the Miss World 2009 finals in South Africa later this year.

Laura is a law and accountancy student at the University of Ulster's Magee campus in Derry. She is a former Miss Teen Ireland winner.